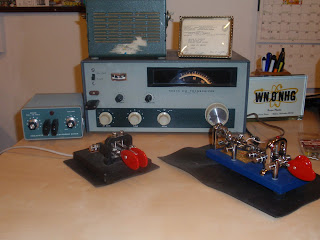 Last Saturday I heard a local ham saying he had an old HW-16 for sale. It is a cw transceiver made by Heathkit in the '70s and designed for the Novice class license holder back then -- a low-power, crystal controlled transmitter. I stopped by on my way home from work a couple days later, and by Wednesday night I was on 80 CW with my one crystal at 3841 calling CQ. First call I was answered by KB8AXS, Mike in Cincinnati. My bug -- a semi-automatic key -- fell apart in the middle of the contact and I finished up with the hand key. That's old-time ham radio, a straight key and simple CW only radio. So that's my new vintage station. Look for me on 3841.
4 comments
Read more

October 24, 2009
Tonight I heard an old friend, N9HAL, calling CQ on 80 meters. I ran into a guy named Bob from Wisconsin a few years ago on 40 cw. We started talking and trading personal information. It turned out we were both originally from Nebraska. Then he asked me if I used to be WA0QMZ. It turned out he used to be WA0ODM, we went to junior high and high school toghether and were both helped along by the same group of older hams in Sidney, NE, the small town we grew up in. Small world. Bob and I have had some random schedules, but most often we just hear each other on 80 or 40 once or twice a year, and then spend some time catching up. It gives me a nice bridge to the past, plus we have a lot in common today and talk about fixing up old radios, operating CW, and some random things. Contacts like that are why this is such a nice hobby. In other radio activity, I did operate the Illinois QSO party last weekend and made roughly 200 contacts. I had hoped to do more, but wasn't feeling 100 perc
Post a Comment
Read more

October 17, 2009
This week the K4M DXpedition to Midway Island has been on the air. I made a few half-hearted tries at working them on 17 meters this week in the late afternoon, and heard them before work on Friday morning on 40 meters, but didn't have time to chase it. So this morning (Saturday) I got up at 4 a.m. as they are only on the air for a few more days. By 4:40 I had them in the log on 40 meter cw and I got them on 30 meters by 5:30. I spent a little time on 80, but I couldn't hear them very well. I actually heard them better on 160 this morning, but didn't have any luck snagging them there. I tried a little on 40 SSB, but at that point the sun was coming up. Oh well, I got them on two bands, so I'm happy. Now it's 7 a.m. and I'm ready for a nap. Tomorrow is the Illinois QSO party, and I plan on hitting it hard. I'll have an update tomorrow night. There is a new radio in the house. I've had sellers remorse ever since I sold my Icom 756ProIII a year and a hal
Post a Comment
Read more

October 10, 2009
This morning the Oceana DX contest was on, and there on the bottom of 40 were quite a few Australians and New Zealanders calling CQ. I worked everyone I heard. Nice to start the weekend with a little DX on 40. Gearing up for Illinois QSO party next weekend. I plan on hitting it hard from the home station. I'm not exactly in a rare county -- DuPage -- but looking at last year's results I didn't do bad. It would be nice to break into the top 10 this year.
4 comments
Read more 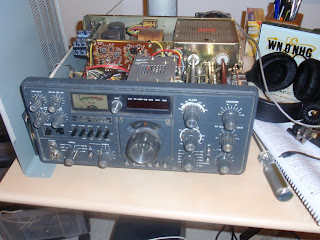 Last Sunday I picked up a project radio. It's an old Yaesu FT-101ZD. I owned one from about 1980 to 1998. Why I sold it in '98 is beyond me, and I've recently been looking for a replacement. I found one locally. It needs cleaning and I ordered a new set of capacitors from the guy who sells cap kits on E-Bay. I'm looking forward to digging into it, cleaning it up and getting it back in top shape. More details to come
7 comments
Read more

September 20, 2009
A question I've been asking myself is why there isn't a "cloud" logging program -- a logging program that exists on the Internet, and everyone can view real time. Logbook of the World is an awards database, not a real-time log. Then this morning I stumbled on HamRadioDeluxe online log . This seems to be totally a beta and work in progress, but very interesting. I've uploaded a few logs to it, and it's posted on the top corner of this site. It looks like someone else was thinking the same thing I was.
6 comments
Read more
September 18, 2009
Test from phone. Getting ready for w9dxcc
4 comments
Read more

September 12, 2009
I finished my road trip today, and worked more DX. I was working an East Coast station on 20 CW while driving through Des Moines, and SP5SA (Poland) broke in to see if he could get that county. I gave him that county, and we kept talking until I reached the next county line and he got Jasper County as well. He thanked me profusely. All this while I was driving 80 mph on I-8o. Later I heard LZ50KA (Bulgaria) calling CQ and answered him. He came right back, and that was another good contact. Not bad for using an ATAS 120 antenna on the back of the Mini Cooper.
4 comments
Read more

September 11, 2009
This week I took a 900 mile drive to visit a friend in West Nebraska. That gave me a lot of mobile time. Here are some highlights. Early on the trip Monday I had a long contact with someone (his call escapes me) who I've talked to a few times from Pennsylvania. While we were talking he viewed this blog, and commented on the photos of the mobile setup. That's how it's supposed to work. Shortly after that I was calling CQ on 40 meters and W7AAZ/m came back to me. It turned out he was about 400 miles ahead of me on I-80, also heading west. We talked for about an hour, largely about mobile setups -- his was in a Corvette -- then both stopped for lunch at the same time. A half hour later I called him again, and we went for another half hour or so. Great mobile activity. Today I started the eastbound trip. This morning I was having no luck on 40 meters, so listened to the I-pod instead. Then this afternoon I switched to 20, and was still having minimal luck. So I settled in on
5 comments
Read more

Vertical back on air 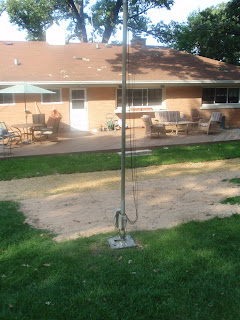 I got the Steppir vertical back in a vertical position this weekend, and it's nice to have it back in service. It blew over during a thunderstorm this summer. I was lucky, the concrete that the support post split and the antenna tipped over without being damaged. I normally keep it guyed, but had removed the guys due to an ongoing deck construction project. Now that project is done, and the antenna back up. I'll have it guyed again by tomorrow night. I haven't been on the air much. Just some random rag chew QSO's on 40 and 30 meter cw. This morning I had a nice chat with Bill, W3BW, on 40. We've talked a few times, so carried on the conversation talking about my experience with cw mobile operation. As I get more active this fall, I promise to get more active with the blog...famous last blog words.
4 comments
Read more
More posts