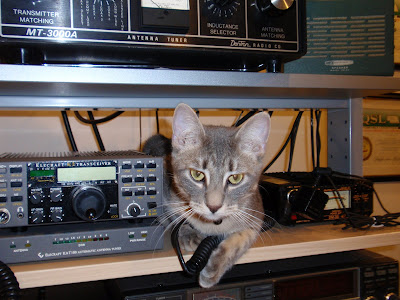 Gus the cat likes ham radio, or at least chewing on the cords.
Post a Comment
Read more

February 08, 2009
I ran about an hour and a half of the NA Sprint last night -- a very fast-paced contest -- and wound up with about 60 contacts. Nothing to write home about, but I had fun. The good news is the line noise that is generated by the electrical system in this neighborhood disappeared last night, about the same time the snow melted. It had been steady s5 noise since December. It's great to hear a quiet band again. This morning I was down enjoying the quiet band, and had three great contacts. They were Joe, N4YG in Huntsvuille, AL, who I've talked to a couple times before; John, K3MD, who I've worked in many contests but never had a long contact with; and Mike, VE3GFN, in Toronto who had a new K3 and we talked K3s for a while. Good morning on the air.
Post a Comment
Read more
More posts