June 02, 2019
Well, so much for me getting active on the blog again.  Every week or so I think, "I should put something on the blog," yet don't do it. Now its June, and my last post was in February.  So I've got some catching up to do.

During the month of March I mainly activated some of the local (Arkansas) summits I had done the year before.  Under the rules of SOTA, you can activate a summit for points once a year.  So with the new year you have a clean slate.  So I went back to some nearby summits and had a good time doing it.

In late April I took another trip to the Ouachita Mountains on the Oklahoma/Arkansas border.  There are a lot of summits in a short area there, and I was able to do four summits in a couple days with nice weather and low bug count.   Below is a picture from Winding Stair Mountain,  W5O/OU-002, and my operating position on top. 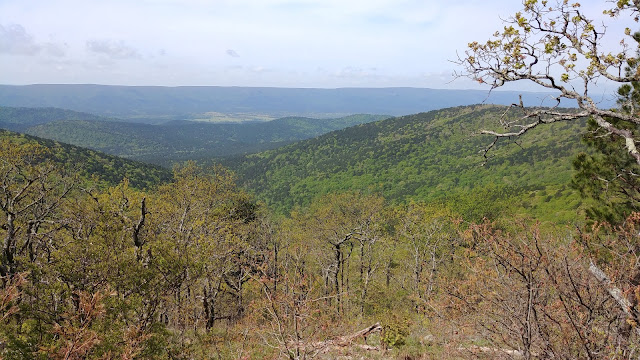 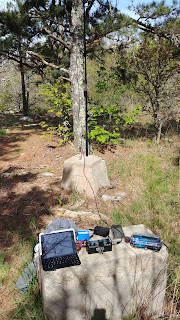 My next big outing was to North Carolina, where I combined a trip to Minis On the Dragon with some summit activations.  I was able to get in three activations, two from the Blue Ridge Parkway, but then the rain set in.  Rain has been a problem this spring.  One thing I learned doing the North Carolina Summits, is they are bigger than Ozarks.  What they describe as a short, easy hike is often a mile or so with a good climb.  A couple of those a day is my limit, at least in the shape I'm in now.

Here's the view from Waterrock Knob, W4C/WM-004, on the Blue Ridge Parkway. After returning from North Carolina, I did one more big tip to Western Arkansas in the Cossatot Mountiains. There I activated Tall Peak, W5A/CS-002, and Buckeye Mountain, W5A/CS-003.  Both were very nice summits with nice hikes which made for a great trip.  Tall Peak even has an old lookout tower at the top that let me sit in the shade and operate with a view. 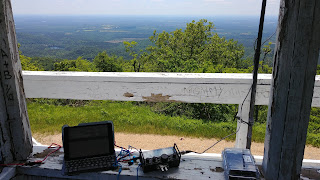 So it's been a good Spring for SOTA. It's kept me out in the woods and not in the shack working on my blog.

summits on the air

WVØH Myron said…
Bruce - I just heard you and WB6BEE chatting on 30m this morning. Just dropped by for a visit and wanted to say hi.