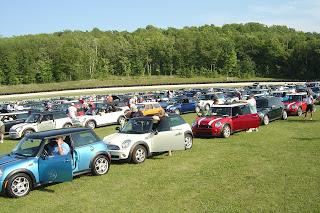 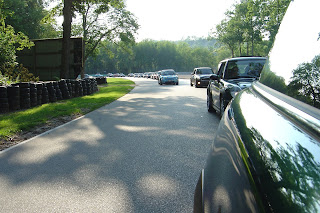 I've been remiss in keeping the blog up, but the month of July isn't a great one for Ham radio. Too much band noise from thunderstorms, too little time, and too many other things to do.

The only exception for that was the IARU contest a couple weekends ago. This is a short, simple contest, with a very simple, fast exchange. I went downstairs Saturday night, and managed to rack up neary 400 contacts. I acheived a high QSO rate running a frequency for a couple hours. That got my contesting juices flowing, and I'm looking forward to next fall's contest season. More on that as we get closer.

I have other interests and hobbies, one of which is cars. My daily commuter car is a 2007 Mini Cooper, and as a friend told me "Minis aren't a car, they are a cult." I participated in the cult this weekend at an event titled Mini Takes The States. It was a Mini rally, with several hundred Mini Coopers at the Road America race track in Elkhorn Lake, WI, about 150 miles north of Chicago. Despite some horrific traffic on the way up, it was a fun day.
Mini Cooper

Saw another S with a dual band whip on the back too, but call info.

K9OZ said…
I walked around looking for antennas, but got distracted by the cars instead. I saw a yellow convertible with an 82-inch whip during the parade lap. I meant to monitor 52 and give a call or two, but forgot that as well.
July 28, 2008 at 10:14 PM