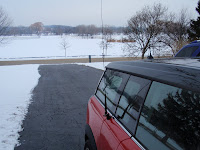 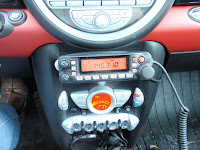 Here's more details on installing ham radios in Mini Coopers.
On my R56 I used the heavy-duty Comet lip mount on the edge of the back hatch and had an ATAS 120 antenna on it. It worked well, and I could get into parking garages. When I was looking at trading the R56 for my Clubman, I assumed I could use the same mount on the center of the back doors. But I've spent days messing with it, and it just doesn't work well. The coax is just enough to bother the proper closing of the door.

So at the moment, I'm confined to 2 meters and 440. I used a small lip mount on the club door -- I think that's what it's called, and it works OK. It isn't real pretty, but it isn't too obtrusive. Nobody has ever noticed it when looking at the car. Next summer I may try removing the AM antenna and putting a simple quarter-wave in its place. For the radio, I'm using a Yaesu 7900 with the radio mounted in the back cubbyhole under the false floor, and the control head attached to the CD changer with double-sided tape.

I can't use the CD, but I never had used it since every CD I own is on the iPod. I had my doubts if the control head would stay there, but it's been there for about 3 months with no problem, and looks good and is easy to use while driving. Forgive the dirty car in the photos, but it's salt season in Chicago.
mobile