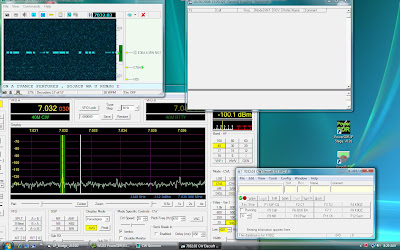 After what seems weeks (okay 2 weeks) of swearing at the computer, I have the station fully set up and ready to run for the contest season. In this screen shot you can see LP-Pan giving me a visual display of the band, CW Skimmer decoding a signal, and N1MM logger running.

I had most of this running on an old XP computer two weeks ago, but I was at 100 percent processor capacity. So thinking it would be too much work to upgrade to a bigger processor on that machine, I bought a basic new gaming computer with Vista, a high-powered processor and lots of RAM. That made sense to me. I could get the machine for $500 or so, move the sound card and extra port cards from the other machine and be ready to run. If Vista was a problem, I could downgrade to XP.

I waw wrong on every assumption. The sound card I had -- an M-Audio Audiophile 2486 -- has no Vista drivers and it was a bear to get the Power SDR software to run on Vista, so I decided to downgrade the computer to XP. It didn't want to do that. After a week of futile attempts to get XP loaded on the new machine, I bought a sound card with Vista drivers and went about the task of getting Power SDR to work on Vista. The secret -- which I finally discovered -- was to run the program as administrator the first time I ran it. One of those Vista tricks. Thanks to the folks on the yahoo group for LP-Pan for the tip.

On Thursday of this week I had it all working. so I decided to put the computer in a better position and rearrange my operating position for better ergonomics for Sweepstakes. That meant unhooking everything and setting it back up. I the process, I reversed two wires from the LP-Pan panadapter the sound card. The result is that it looked like it was running correctly, but I was having all sorts of problems with ghost images and other strange occurances. In trying to fix it, I blew up the software a couple times, but have gotten good at reinstalling everything.

Finally, last night I realized the two channels from Panadapter to the sound card were reversed. I fixed them, and I'm done. It all works as advertised.

Now I've added CW Skimmer and the last piece of the puzzle. I'm not sure I can multi-task enough to use it in the heat of a contest, but I'll try it next weekend.