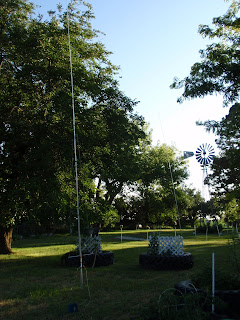 Our success was due to good antennas. Here are photos of the 20 meter loop held up by Brad's push-up pole and my phased verticals, with my aunt's windmill in the background. No, we didn't use the windmill as an antenna support, but we thought about it.
1 comment
Read more 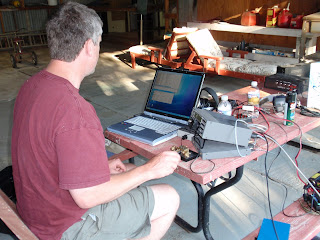 I travelled to Nebraska again this year to particpate in Field Day with my cousin Brad, KG0GY. We did our first attempt last year, had a lot of antenna problems but managed about 360 contacts. This year we were much better prepared and organized on the antenna front, and did 800 contacts as a 2B station. We ran a K2 and an Icom 756 Pro to phased verticals on 40, a loop up about 40 feet on 20, and a multi-band OCF dipole on 80, 40 and 15. The dipole wasn't high enough for us to do much on 80, but it did well on 40 and 15. We were very happy to more than double our contacts from the year before, and we're starting to wonder how to top that next year. We operated about 15 hours, slept for a few hours in beds, and had dinner with my aunt. Not a bad Field Day at all. Shown in the photo is Brad, running the K2 on 40 meters. We were inside the door of an old shed, but running on emergency power.
Post a Comment
Read more

June 13, 2009
I was having problems with high SWR (standing wave ratio) on my ATAS 120 mobile antenna. My guess was the feedline, which was the standard tiny coax that comes with a Comet or Diamond trunk lip mount. I ordered the Coment 3D4M coax cable assemly, which has 13 feet of RG58 coax. All of a sudden my SWR on the ATAS goes down to 1:1 on 40 meters and some random RF problems are solved. Lesson -- use real coax on HF mobile, not the miniature type that's designed to go through a gap easily, but may be so-so on transmitting and sheilding RF.
1 comment
Read more

May 24, 2009
I made it to the Dayton Hamvention and back last weekend. The highlight for me was the contest forum on Saturday morning. I just stumbled into it, but had a great time and learned some things. I seemed more at homewith the contesters than most of the groups I was involved with at Dayton. Most contesters are CW ops, that's part of it. My big Dayton purchase was a Stationmaster controller from Microham. It's purpose is to interface between the K3 and the PW-1 amp. I got it up and running, but it's been buggy so far, and seems to go into error mode every now and then. I'll keep messing with it, but so far I'm regretting my purchase. It added a lot of complextity to the station, just so I wouldn't have to push a button on the amp and the SteppIR vertical controller when I changed bands. I saw that at good insurance for the amp, but so far, I'm not sold. More on that later.
1 comment
Read more

Dayton one week away

May 07, 2009
I'll be in Dayton one week from tonight. Any followers or tweeters going to be there. Let's do a meet-up.
2 comments
Read more

Two contests at once 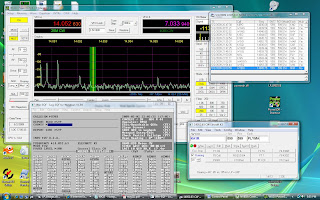 This weekend I was able to run two large QSO parties at the same time -- the New England QSO party which covers the New England states, and the 7th Area QSO party, with all the 7th call district -- Washington, Oregon, Nevada, Utah, Arizona, Idaho, Montana and Wyoming. I had tried doing it in the past, but found logging a probem. You really need two separate log programs open. With the new setup with the K3 and LPBridge, I'm able to run two logging programs at once. Saturday night I was running the 7QSO party on WinEQF and the NEQSO party on N1MM logger. Both were up on the screen, so switching between the two was simple. I don't have exact numbers, but I did around 70 contacts in the 7QP and 40 in NEQP. I just didn't hear enough New England stations. On another note, I got my 80-meter dipole back up in the top of a tree where it belongs. It's now at 40 feet, rather than sloping from 40 to 10 feet.
Post a Comment
Read more

April 20, 2009
Last week I had the Icom 7000 in the Mini Cooper, but was running the power for the radio from an accessory jack in the boot (trunk.)  That worked, but we all know that's not the best way to do it in the long term. Sunday morning I was on a Mini Cooper web site   and did a search for running power lines through the firewall. It turns out it was incredibly simple, with Mini leaving a space to do exactly that, and right next to the battery. So I now have a fused power line running direct from the battery to the radio in the boot. This solved a couple of issues, and I can now crank the power up to 100 watts without fear. Of course, I had to drive around a make a couple contacts. I am impressed with the 7000 as a mobile radio and am getting the hang of going to the right menu on the fly. I'm happy, and ready for the road trip to Dayton next month.
Post a Comment
Read more

April 16, 2009
First contact with the new mobile this evening while coming home from Rockford. N4YG, Joe, in Huntsville, AL. We both had good signals, so I think the new setup is working. I got the MFJ remote antenna controller and it works. You push the button to raise or lower the antenna for best SWR. Yes, I can't change bands while driving down the road like I could with the Yaesu radio, but the Icom IC 7000 is a much nicer radio. More on that as I spend more time on the air. Listen for K9OZ/m around 7030 mornings and late afternoons.
Post a Comment
Read more 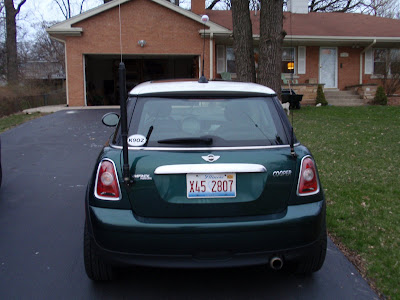 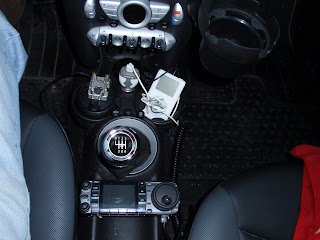 I spent most of Saturday getting the Icom IC 7000 installed in the Mini Cooper. It was a trick, but it's in and seems to be working fine. I'm running the Yaesu ATAS 120A antenna, and have a gizmo on order that will allow me to tune the antenna manually. For right now, it's tuned to 40 meter cw and that's where it will be this week. I had picked up a neat little paddle at Dayton a couple years ago, and hadn't had a chance to really use it. I screwed it to the top of the Cooper's ashtray, and it should work great there. The position is perfect. I'd like to have the control head higher -- closer to line of sight, but for right now its sitting next to the shift lever. Not great, but doable. If you really want to mess with the radio, pull off the road.
Post a Comment
Read more
More posts