May 16, 2010
I spent Saturday at the Dayton Hamvention and had a good time at the contest forum and at the hospitality suite of the SMC (SOciety of Midwest Contesters) on Saturday night. It was a great chance to talk contesting and station building with other contesters My only purchase was another keyer, plus some odds and ends. More on that keyed and a couple other things when I get home. - Posted using BlogPress from my iPhone
4 comments
Read more

May 09, 2010
Ok, I got outside and worked on the STeppIR vertical this morning. As I suspected, the problem was with the coax connection to the antenna. As I kept trying different coax and radio combinations, suddenly everything worked again. In plugging and unplugging the coax and trying different combinations, I evidently cleaned the connector on the antenna. After it started working again, I went back and cleaned everything with Deoxit, and hopefully it will solve the problem. All I know is it's nice to have the vertical back. I did open the antenna, and will post some pictures shortly. - Posted using BlogPress from my iPhone
2 comments
Read more

May 08, 2010
I've been using the SteppIR big vertical for about three years with 20 radials under it. It works great, but over the last winter an intermittent problem has shown up. It seems I'm somehow losing connection with the antenna. All of a sudden, the antenna goes deaf and won't tune. I can recalibrate it a few times, and sometimes it comes back. This happened again this week, and for the life of me I can't get it to come back. Last fall i opened the antenna up and did continuity checks, and suddenly it started working again. I guess that's what I'll do tomorrow. I may take some pictures and post here on my progress. So far, I've removed the coax from the antenna and attached it to a dummy load at the antenna base. I get a nice flat SWR reading when I do that, so it's not the coax. I also hook my Yaesu FT-817 directly to the antenna with about a 3 foot run of coax, and get nothing buy high SWR and no signal. So I know the problem is with the antenna. I suspect
2 comments
Read more

Minis on the Dragon 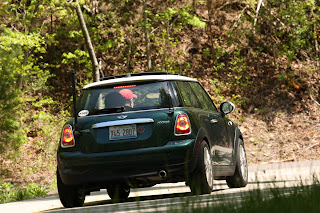 April 28, 2010
I had a couple of good cw mobile contacts yesterday. Look for me on 40 cw all day today and Sunday.
2 comments
Read more

April 17, 2010
Still trying to get the iPad to control the radio. I was hoping my next post would be a step by step description of how I did it, but still missing the last step. I can't get the audio to output a from the right port on the computer. Sometimes I wonder why I derive myself nuts with this stuff. - Posted using BlogPress from my iPhone
4 comments
Read more

April 10, 2010
Ok, this is the first post I've tried to make by actually typing on the iPad. It works, but is going to take some getting used to the keyboard. The iPad is an interesting toy, and I've almost got it sete to where I can control a radio remotely and stream audio back to the iPad. I don't have the audio part working yet, but I'll figure out my mistake soon. This morning I made a nice QSO with Pete K4BKD, who I've talked to multiple times. It was a good saturday morning cw chat, we talked about weather, radio, dogs, radios, cars, and pollen counts, all at 25 words per minute using Morse code. Fun. Location: Lincoln Ave,Lisle,United States
4 comments
Read more

April 03, 2010
This morning I spent some time running the QRPARCI QSO party. I had a great time and remembered why I like qrp so much. More details tomorrow. - Posted using BlogPress from my iPhone
2 comments
Read more

March 28, 2010
I had a co-worker over to the house the other day and he saw the radios and started asking questions. Unfortunately, over a three-hour drive, he kept asking questions and never understood what ham radio was, or why I would have all that stuff. He kept relating it to CB radio, and never could get out of that mode. This morning's activity is a good example of a nice contact, or QSO. I called a CQ, which is a general call saying I'm looking to talk to anyone. I was answered by K2AOP, John, in Phoenix, AZ. We traded names, locations, and started experimenting with comparing signal strenths with different antennas. We both had both a vertical and dipole antenna, and we tried vertical to vertical, vertical to dipole, dipole to dipole, etc. It was ineteresting. Then we started talking about jobs, and he asked me for more detail on what I did. I went into some detail, and he had good comments. It was just a nice, randon QSO with a nice guy in the other side of the country -- all done a
2 comments
Read more

March 27, 2010
I went to the Power SDR group on yahoo and kept reading the posts. Thanks to Larry, N8LP, the guy who designs, makes and sells, the LP-Pan pandadpter for the K3, I did find a solution. He had posted a procedure to run through for removing the program, removing all files and folders and reinstalling the software. I followed his instructions and no luck. I did it a second time, still no luck. The third time...it magically worked and I have Power SDR/IF stage version 1.19.3.4 running 100 percenct again. It's an amazing system, and the tinkering to make this stuff work is half the fun. I've learned a lot about computers, drivers, software, etc, in the process of getting this all running. But this isn't for the computer novice, easily discouraged or faint of heart.
1 comment
Read more
More posts